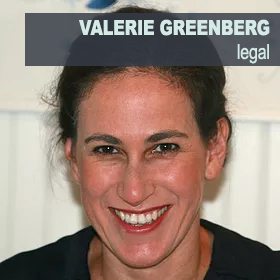 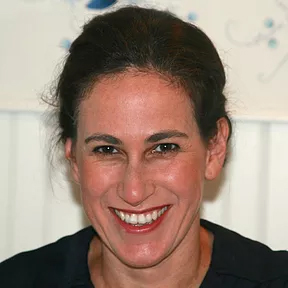 Valerie is the principal of The Greenberg Law Firm, which she founded in 2001. The firm counsels clients of every size, from startups and midsized companies to publicly-traded firms.   She typically functions in the role of outside general counsel and is responsible for all legal issues faced by her clients, many of which she handles on her own.  Valerie’s clients operate in a wide range of industries, from technology hardware and software manufacturers and biotechnology firms, to tableware and home goods designers, food companies, clothing designers, landscape artists, art conservation firms and fragrance creators.   Areas of practice in which she concentrates include all forms of contracts (including supplier, reseller, and employment agreements as well as intellectual property licenses and leases), trademark work and general corporate matters, such as corporate formation and transactional work.

Prior to founding The Greenberg Law Firm, Valerie served as General Counsel (in-house) for Dot Hill Systems Corp.   Following Dot Hill’s merger and relocation to the west coast, the NASDAQ-listed company remained a client of The Greenberg Law Firm until its acquisition by Seagate Technologies in 2015, at which time the The Greenberg Law Firm began handling legal matters for Seagate as well.  From 1993 to 1998, Valerie was an Assistant District Attorney in Philadelphia, first in the trial division and then in the civil litigation unit defending the District Attorney’s Office and its employees from federal civil rights and discrimination claims.   Highlights of her career as a prosecutor included several felony jury trials, hundreds of bench trials, a perfect record defending the District Attorney’s Office in federal court, and a successful argument before the U.S. Third Circuit Court of Appeals.

Valerie earned a B.A. from the University of Pennsylvania and a J.D. from the Boston University School of Law, where she was a Paul J. Liacos Distinguished Scholar.  She was born in Brooklyn, raised in Queens, and educated in the Bronx, at the Horace Mann School.   Valerie now lives in Westchester County with her husband, Michael, and three children, Jonathan, Matthew and Zoe.